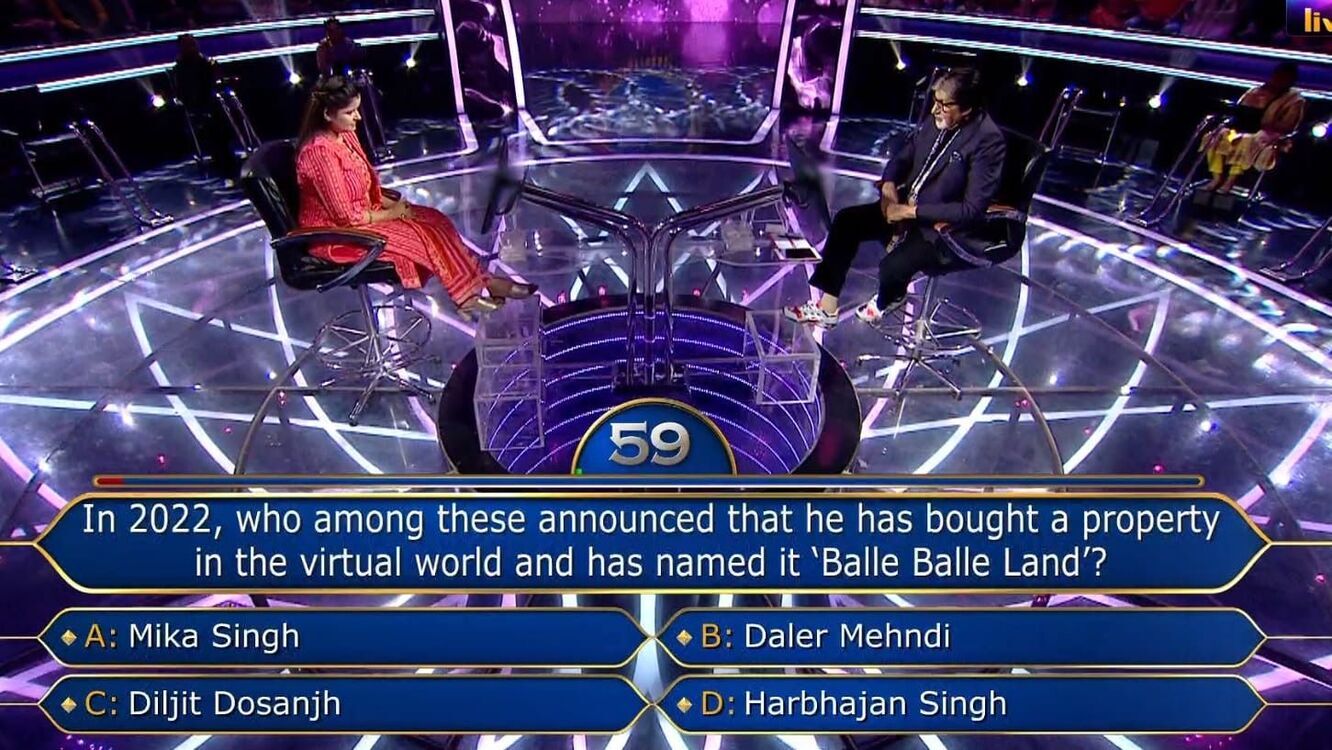 Daler Mehendi virtual land purchase on PartyNite metaverse made headlines early this year and now it is featured in the nation’s most loved quizzing show, Kaun Banega Crorepati Season 14 as a multiple choice question.

The show’s host, Amitabh Bachchan asked a contestant “Who among these in the year 2022 bought a virtual land and named it Balle Balle Land?” The question was being played for Rupees One Lakh Sixty Thousand and the options were Mika Singh, Daler Mehendi, Diljit Dosanjh and Harbhajan Singh. The contestant used a lifeline to respond – Audience poll. 56 percent of the audience voted for Daler Mehndi and the answer was correct.

Daler Mehndi shared his excitement, “I did not see the episode on TV but a few friends had shared the clip. I spoke about it on the Kapil Sharma show when I had just made the purchase and now it has reached KBC, it really keeps getting bigger. Such a mass popular show spoke about my Balle Balle Land on PartyNite Metaverse, now it has surely reached aam janta. Metaverse is the future and the digital world will keep growing, I am glad I took the step of buying land on Metaverse. I also welcome my artist fraternity to be part of my Balle Balle Land with their offerings so they reach straight to the heart of Gen-Z and Gen Alpha”.

Speaking about the development, Rajat Ojha, Founder PatryNite, who had inked the land deal with Daler Mehndi stated, “A question on Metaverse on KBC goes to show that Metaverse is now reaching the common audience. It is no longer an alien. Not only did 56 percent vote the right answer but a show which is as mainstream and a household name as KBC has spoken about Metaverse gives us assurance that this platform will grow, this also affirms our belief system to focus a lot on consumer space and offering value to our users.”

Amitabh Bachchan’s baritone on KBC is a staple in Indian households.  Keeping the nation on tenterhooks from Monday to Friday 9 PM onwards, not just the participant on the hot seat or the audience in the studio, the viewers glued to their TV sets become a part of the guessing game. Current affairs to history, sports to pop culture the show navigates through knowledge across spheres. Through this question, the phenomenon of Metaverse has now reached the man on the street.

Daler Mehndi had launched the blockchain powered PartyNite Metaverse in January 2022 with a concert and soon after he purchased a land on the Metaverse for an undisclosed amount which in turn was unveiled on Holi with a concert sponsored by McDowell’s.