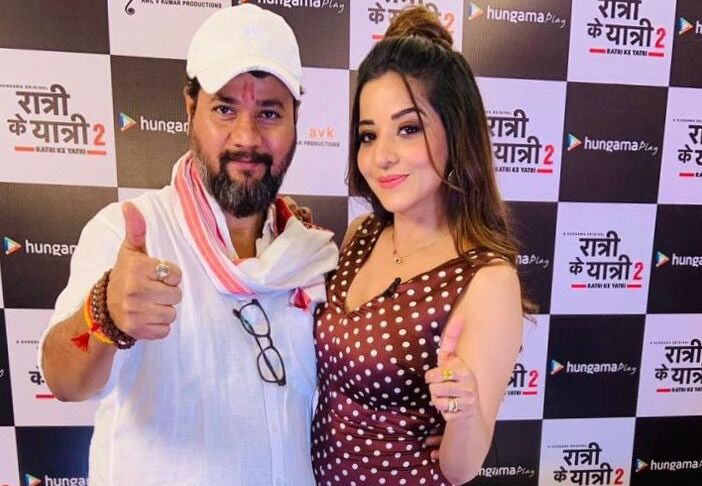 Mona Lisa : You often wonder if this is really what a woman thinks

Actress Mona Lisa, who is part of the web series Ratri Ke Yatri 2, says that it was amazing to be part of the project. The actress adds that working with director Anil V Kumar made it even more worthwhile.

“It’s an honour to work with a veteran like Anil V Kumar sir. I remember when his team reached out to me, I jumped at the thought of working with him again and I was very confident in his story. For me, when it’s Anil V Kumar sir, it’s only yes,” she says.

She adds, “Working with Anil V Kumar sir is always great. I get to learn so many things. My character in Ratri Ke Yatri 2 is very challenging and I love doing challenging projects. I can only say when you have mentors like Anil Sir you only grow. And you take back a lot of learnings. It’s just awesome to work with Anil Sir.  This is my second project with Anil sir. I was in Dhappa and here again I am in Ratri Ke Yaatri 2, it’s an anthology series. There are 5 different stories which have been written beautifully by him. It’s a great honour to work with him and accept such challenging characters. Being an actor, I want to do different roles that prove I am a versatile actor. It’s wonderful to get different characters written by him and getting directed by him because he teaches what he needs and portrays it. This character is a girl in a red light area. I wanted to do this character so nicely that it looks good and my fans like me in this never seen before character. And it’s because of him that I could do justice to the character.”

The story is what sets this series apart, says the actress, adding, “I agree the part was bold. The story was true to its nature. You will often wonder if this is really what a woman thinks. We sometimes tend to be so judgmental but life can be black and white and for these women it surely is. They are doing their job well but we disregard their profession they chose. I feel like we really need to develop a lot of change in the society, you never know the profession they have chosen out of what situation. We cannot judge someone without knowing what she has been through, they must have made a choice going through a lot of hardships and I feel like we cannot see someone with such disregard.”

Mona Lisa adds, “Light area life attracts attention. My character is very interesting and a bit grey. Having played this role myself, I really feel that we should not discriminate and differentiate between them and us because nobody does this work by choice. I feel let them be themselves; you never know what goes on in their lives. It was tough for me to get into the character but Anil sir made me understand how to talk and enact, behave, helped me with everything. I was nervous though and when he said the act was perfect. I am really excited for the audience’s reactions.”

Youngest member of the mega cast of Uunchai revealed!