The play explores a complex and layered relationship between a professor and his two students and stars Makarand himself with Aahana Kumra, Sanjay Dadhich and Anjum Sharma. 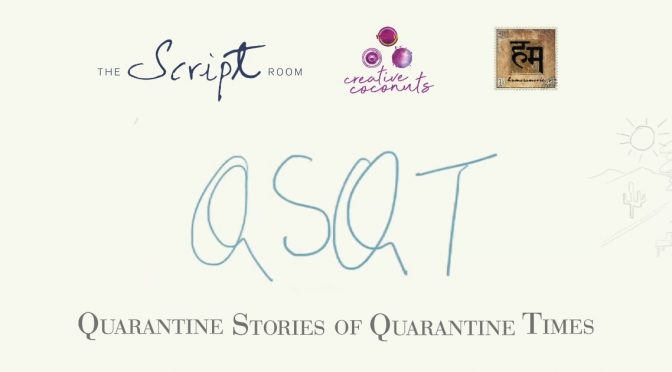 As the corona virus crisis continues to upend the entertainment industry, streaming platforms have been entertaining the audience with a lot of new content shot within the confines of the homes. The Script Room, a creative hot shop that focuses solely on audio visual communication has recently created and produced a series of short films titled QSQT (Quarantine Stories of Quarantine Times). The film comprises 3 short stories that capture the woes of free citizens during the harsh lockdown observed by the country to curb Covid-19. QSQT has now released digitally on HumaraMovies.

The three short films within QSQT are named Essentials, Extension and Losing it, stars Vijay Maurya, Sanjay Dadhich, Vishal Capoor, Muskaan Khubchandani, Akashdeep Arora, Chirag Malhotra and Kunal Malhotra respectively. All the three films were scripted, shot, produced remotely and on a skeletal crew at home observing all social distancing norms laid down by the government. Karan Kulkarni has created the title track and casting has been done by Casting Bay.

Ayyappan, Co-Founder, The Script Room says, “This is our latest, jolly project. It’s titled QSQT (Quarantine Stories of Quarantine Times). Thanks to our friend Tushar (Coconut Films) for calling and saying that his brain is getting fried and can we do something exciting. We got the entire team together on Zoom and immediately started jamming on stories. We had a lot of ideas, thoughts and we shortlisted three plots what will be easily executable, given the lockdown constraints. And we clearly stayed away from very serious, social-purpose kind of narratives and chose light-hearted, insightful stories of the lockdown, more true to our personality as The Script Room.”

Ramsam Co-Founder, The Script Room, says, “We thought we’ll write something that can be shot from home. And instead of writing general stories and shooting during lockdown, we thought we’ll write stories about the lockdown itself. The execution in itself has its own share of ridiculously hilarious stories. Like to begin with casting, it meant not just the cast, but also their house, their willingness to direct themselves, the kind of equipment they have, the speed of their internet to transfer the files. Everything had to be considered. They had to shoot each other, and situations where both of them had to be in the same frame, the camera was placed on a chair, bed, cupboard, books or whatever was available and shoot. And the director was miles away only listening to them talk, and figuring out if it’s ok. It is the shoddiest, crude, organic way of narrating a story, the shaky camera, the bad lighting, the odd angles…it had its own charm. The same reflects in the titling and the music. We kept it raw and intuitive. These may be the stories told with the highest level of restrictions. But we’ve never had greater fun than this.”

He added, “It’s time and we should be grateful that virtual production and filmmaking has become an indirect proponent of social distancing, allowing filmmakers to create full scopes of movies without ever having to cram people onto a production set.”