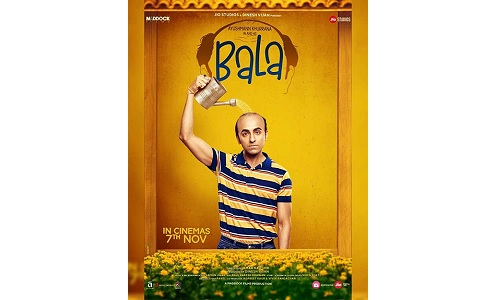 Taking their successful association to the next level post Stree, the trio – producers Jio Studios, Dinesh Vijan and Amar Kaushik are back with Bala featuring Ayushmann Khurrana as the lead protagonist – that touches upon the subject of premature balding in men and the social stigma around it in a profoundly funny and entertaining way.

Ever since the trailer has been launched, Ayushmann’s realistic look has become a winner with the audience, especially his fans, who cannot stop raving about his performance and the movie’s hilarious narrative.

Known for churning out content-driven, cinematic experiences, Maddock Films is set to raise the bar even higher with the hilarious and honest story of Bala, helmed by the talented storyteller, Amar Kaushik. With Jio Studios backing the project after their previous successful ventures together, the terrific trio promises the audience yet another content-driven yet commercially viable big screen experience.

Producer Dinesh Vijan says, “At Maddock we’ve always believed in backing a director to make his best film. With Bala, Amar has outdone Stree and taken you on a journey that will make you lose and find yourself in it. This is our third association with Jio and we couldn’t have asked for better partners, Jyoti Despande have championed the team to push farther and we feel very fortunate to have found such supportive and collaborative partners.”

Amar Kaushik adds, “It’s great to work with Dinesh and Jio Studios who not only understand the importance of good subjects but also invest in stories that really needs to be told. Bala is the story of a common man and so each of us gravitated to the subject quite naturally. We hope the audience really enjoy the movie.”

Ayushmann Khurrana is all set to amaze us yet again with his spectacular performance in Bala. The movie starring Ayushmann, Yami Gautam and Bhumi Pednekar in the pivotal roles is already talk of the town. After releasing the first song Don’t Be Shy, the makers now unveil the next song titled, ‘Naah Goriye’.

The song features Ayushmann and Punjabi star Sonam Bajwa and they can be seen shaking their leg on singer Harrdy Sandhu’s superhit song Naah.

The foot tapping already popular song at the pubs and clubs will compel you to hit the dance floor this Diwali weekend! Composed by B Praak, the song is penned by Jaani and sung by Harrdy Sandhu.

To get into the groove of the day and scene, lead cast Rajkummar Rao and Mouni Roy would often dance on the sets of their next – Made in China

On set co-star camaraderie is something Bollywood is all too familiar with. While the notion of cat fights and ego tussles are what make stories juicy, it’s really the bonding that helps make those experiences memorable and those stories worthwhile. The vibe on the sets of Made in China was no exception!

The lead pair of Dinesh Vijan’s next production venture – Made in China – Rajkummar Rao and Mouni Roy found something different to bond over and that’s dancing. Both are known to have quite the flair for dance. It thus comes as no surprise to find out that first time co-stars would use dance to kick start their say and get into the mood.

“Every morning, we would play a track or two depending on the mood we had to get into for the scenes we were shooting that day and we would dance like maniacs” says Mouni. “Raj enjoys dancing just as much as I do and it was such a delight to see him share my passion and my madness. He’s really one of the coolest and most fun people I’ve worked with who doesn’t take himself too seriously but puts every ounce of his being into whatever he does – be it dancing off camera to giving that jaw dropping performance,” Mouni says signing off

Rajkummar Rao recently launched the trailer of his film Made In China along with his co-star Mouni Roy, director Mikhil Musale and producer of the film Dinesh Vijan. The trailer gave glimpse of Rao’s unique look in the film, where he plays a small time Gujarati businessman.

Known to get under the skin of every character he plays on screen, actor-extraordinaire Rajkummar Rao raised the “prep” bar many notches higher with his next – Made in China that will hit the big screen this Diwali. Since this was his first tryst with the Gujarati culture, Raj decided to take the bull by the horns and spent a month in Ahmedabad ahead of the shoot. He even spent time learning the language – both at its core and how it’s locally spoken.

Also for his look, not only did Raj gain around 8 kgs for his belly but also added a unique feature to his face, a unibrow. Interestingly, director Mikhil Musale actually has a unibrow. Inspired by his director, Raj came up with the idea of sporting the same and added it to his look to give his character, Raghu Mehta a standout feature that’ll capture eyeballs.

Raj says, “When i saw Mikhil, I immediately made up my mind to sport a unibrow. It looked very hatke and I felt it gave my character an interesting look” Well, we can definitely say that it was a good idea. Rao’s look has got a big thumbs up from his Industry colleagues.

After the stupendous success of Hindi Medium (2017), Stree (2018) and Luka Chuppi (2019) Dinesh Vijan seems unstoppable!  Maddock Films is slowly and steadily making a mark in telling unusual stories and yet being commercially successful!

Dinesh Vijan known to introduce the genre of horror comedy to the Hindi film industry, is all set to bring a spree of films, building an entire universe of it. If sources are to believed he green lit the projects during the inception of Stree itself!

His next venture Rooh-Afza has just announced its newest addition Janhvi Kapoor. The young star, who has made a promising debut last year will be joining the cast of Rajkummar Rao and Varun Sharma.

Producer Dinesh Vijan says, “For Rooh-afza we needed actors who could jump into their roles with unabashed conviction. Rajkummar and Varun are phenomenal actors, comedy is a space they excel in and own. For the female lead, we needed someone who could portray two contrasting personalities with ease and Janhvi stood out, she really connected with the script. Her talent is still raw, but she is excited about being moulded. The script is young, refreshing and totally crazy, and she is exactly that!”

For a newcomer like Janhvi this sounds challenging and exciting, producer Mrighdeep adds “We took some time to finalize the female lead. Besides being pretty, she needed to oscillate between two characters which are poles apart. You will fall in love with her in one scene and won’t believe she is the same girl in the next one. It’s not an easy switch for an actor. It’s the perfect casting”

This would  be a great opportunity for her to showcase her talent, as both characters ( Roohi and Afsana)have contrasting personalities! Takes us back to Chalbaaz days! Sriji had impeccable comic timing and it will be thrilling to see Janhvi light up the screen too.

Shoot starts in Uttar Pradesh this June and the film is slated to release on 20th March 2020. Produced by Dinesh Vijan and Mrighdeep Singh Lamba the film is being directed by debutant Hardik Mehta.

“Only a director who understands the whacky world of the film, can make the crazy characters pop out of screen… make them real, despite them being in the most absurd situations. We saw that ability in Hardik. Plus his repertoire is quite impressive,” explains Mrighdeep.

“Hardik is a perfect fit, his national award winning documentary Amdavad Ma Famous, made me take notice of him. His strength lies in tapping nuances and pulling you into the world of the film. He effortlessly brings realism to bizzare situations. There’s a thin line that connect ours and the supernatural world, and he seems to have the potential to stitch that perfectly!” says Dinesh Vijan.

Well Vijan sure has an eye for spotting talent, with debutants Amar Kaushik and Laxman Utekar (Stree and Luka Chuppi respectively) striking gold, it seems this is sure to be a winner too!

Rooh-Afza is a Maddock films production and a Jio Studios and Dinesh Vijan presentation.

A family that dances together, stays together! Welcome to Guddu and Rashmi’s life – a couple who doesn’t want to dance or stay with the family!

Kriti Sanon and Kartik Aaryan’s first song from their much anticipated film Luka Chuppi is already making us groove on our seats! In true 90’s style. The song features a barrage of dancers, 150 to be exact along with some super fun steps too. The couple is seen doing “ luka chuppi” with the family, played by Pankaj Tripathi, Vinay Pathak, Aparshakti Khurrana amongst others.

The foot tapping redux has been recreated by White Noise studios and has been choreographed by Vijay Ganguly.

Dinesh Vijan says, “Poster Lagwa Do was the first song we selected for the album. Actually, much before we even knew how we could use it, we acquired it, it just so happened that it fit so aptly into our plot! The video has turned out to be super fun too. It’s unlikely to use the full cast in a promotional song, as it isnt easy getting everyone back together! But it all worked out and it’s looking great!”

It is said that the best journey is one which takes you back home and well looks like Kartik Aaryan can explain this best. The actor who will begin shooting for Dinesh Vijan’s Lukka Chhupi set off for the first schedule of the film last evening. Surprisingly the film is being shot in Gwalior which happens to be Kartik’s hometown. The actor who’s born and brought in Gwalior couldn’t control his excitement when he learnt about the first schedule of the film, but he had no idea that people from Gwalior were more excited than him.

Yesterday when he landed in his hometown, Kartik was surprised to notice his posters on the road, giving him a warm welcome. The actor was already elated with the posters, when he further reached the UKP Main Gate he was shocked to see his fans waiting for him with garlands and bouquets for him. The humble actor that he is, Kartik loving accepted the flowers and even clicked selfies with them. He was really taken aback with the love and affection he got in his hometown and his parents were feeling really proud about him. But what really touched the rising superstar was the fact that some special students from a blind school were present there to welcome him back home. They performed to his hit songs and a blind girl even sang for him… Now this gesture really made Kartik Aaryan’s journey back home special!

Kartik will be in Gwalior for 50 days along with his co-star Kriti Sanon. It is said that he will be playing the role of a local TV reporter in the film. Last week the first look of the film went viral on social media and broke the internet, where we see Kartik and Kriti as the groom and bride and all in love. Now we just can’t for yet another entertainer from Kartik Aaryan.

T-Series chairman and managing director Bhushan Kumar says, “We are overwhelmed with the recognition Hindi Medium received at the Filmfare Awards last night. We are also delighted at Vidya Balan’s win for Tumhari Sulu and Irrfan Khan’s for Hindi Medium. Working with committed actors is a huge blessing.”

Our joint producers Tanuj Garg, Atul Arun Kasbekar and Dinesh Vijan deserve equal credit for bringing these remarkable and thought provoking stories to the audience. We hope to continue to produce engaging content like Hindi Medium and Tumhari Sulu in days to come.”