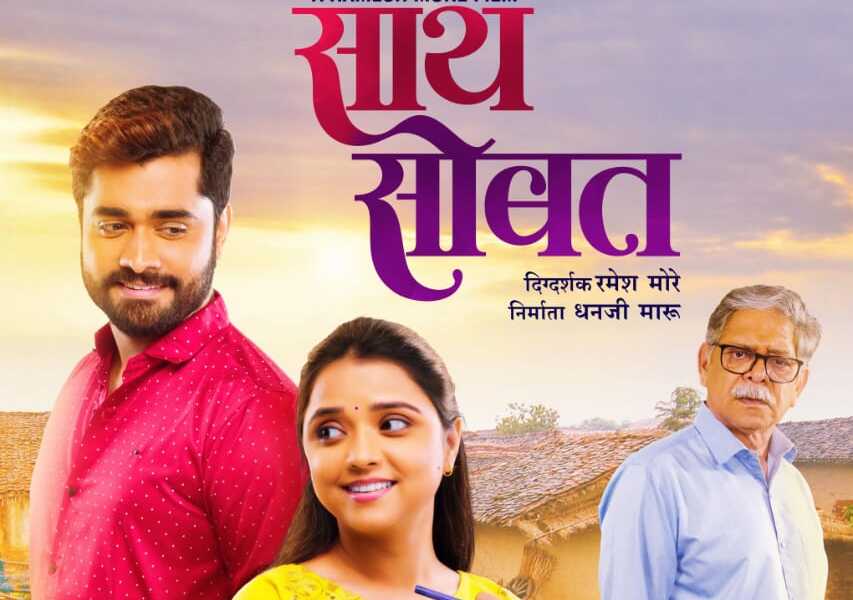 In the fraternity of films, some films become successful in maintaining their own distinct identity. Even before the shows, they get the attention of critics as well as fans by inscribing their name on the awards. Few of these films create curiosity in the minds of the audience even before their release. The new film ‘Saath Sobat’, which follows the same path, will hit the screens on January 13. The first poster of the film ‘Saath Sobat’ was unveiled recently.

Presented by Prasanna Vaidya, ‘Saath Sobat’ is produced by Dhanji Maru under the banner Maru Enterprises. This movie is written and directed by Ramesh More. Director Ramesh More has so far made 18 films as a writer-director and has also produced three films. More’s journey as a writer-director started with the film ‘Akalpit’ in 2004 and today has reached the film ‘Saath Sobat’. More’s films have made their mark in various film festivals in the country and abroad and have won many awards. His film ‘Champions’ won two National Awards for Best Social Film and Best Child Actor.

The story of companions who stay together in the evening of life, will be seen in this film. This movie gives a new vision of life. It has a love story as well as a strong message. It also has all the spice required for entertainment, with lyrics that blend in with the flow of the story and a melodious musical edge attached to them, so that the audience can experience a film with commercial value in the form of ‘Saath Sobat’ and also conveys its message in a very simple way.

There are actors such as Raj Dutt, Mohan Joshi, Anil Gavas, Sangram Samel, Amol Redij, and Dilip Asurdekar in this film. Mrunal Kulkarni, a new face doing her debut in this film. DOP Harshal Kantak has done the cinematography of this movie. Lyrics are written by Yashshree More and Music has been composed by Mahesh Naik in this film. Background music is also given by Mahesh Naik and Abhishek Mhaskar is an editor of this film. The costumes are by Yashshree More and the makeup done by Santosh Chari and Satish Bhavsar. Art direction is done by Prakash Kamble, Dance and Hairdressing by Meenal Ghag. The executive produceder is Kaushik Maru and Yashshree More.