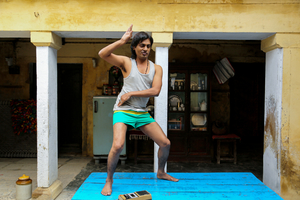 Actor Nawazuddin Siddiqui who has played various characters in so many films will be yet again seen playing a different role in his upcoming film Ghoomketu. Directed by Pushpendra Nath Misra and produced by Phantom Films and Sony Pictures Networks (SPN), this film will be exclusively releasing on ZEE5.

Ever since Ghoomketu was announced to be premiering on the platform, everyone has been looking forward to the release on 22nd May. A fun-filled comedy-drama, Ghoomketu has a wickedly playful backdrop and will be great for the entire family to watch together. The teaser of the film was released a few days ago and there is no doubt that this is a must-watch family entertainer.

Here’s what Nawazuddin Siddiqui has to say about his character in the film: “When I was in theater, I use to do a lot of comedy plays but on the silver screen, because of my intense look, the characters moved towards a more serious genre. Ghoomketu is from a small town in UP, wears quirky outfits and has a tonality of a UP wala. He is an aspiring writer with quirky takes & is on a roller coaster ride to achieving his dream. In short, its a light-hearted family entertainer.

In a comedy movie or show, I believe timing plays an important part and especially in Ghoomketu because I play the role of storyteller, so I have to compel the audience about the character as well. The chemistry and rapport with all my co-stars made it even easier. I could let go of all my inhibitions and make a fool of myself on the sets as well, play around with the character, and do weird poses just like Ghoomketu would do. The movie is made with a lot of love and honesty, I hope my fans will enjoy watching me in a comic role and subscribe to ZEE5 to watch it on 22nd May” expresses Nawazuddin Siddiqui.

Apart from Nawazuddin Siddiqui, the film also has ace director Anurag Kashyap as a cop and the talented Ila Arun as Ghoomketu’s Aunt, in lead roles along with Raghubir Yadav, Swanand Kirkire, Ragini Khanna and others. Along with Amitabh Bachchan, Ranveer Singh, Sonakshi Sinha; the film will also see special cameos from Chitrangada Singh, Lauren Gottlieb and filmmaker Nikhil Advani.

ZEE5 recently launched the poster of Ghoomketu which shows the lead, Nawazuddin Siddiqui arriving in Mumbai with his ‘pitara’ and the iconic Gateway of India as the backdrop. The movie is a comedy-drama from the viewpoint of an inexperienced writer struggling to make it big in the film industry in Mumbai. On his quest to come up with a great story, he is inspired by day to day mundane life activities. Will his ambition and determination exceed his talents? Or will a corrupt cop, who is on a mission to find Ghoomketu, put a brake on his 30-day escapade?

Ghoomketu premieres on 22nd May, exclusively on ZEE5. Stay tuned!